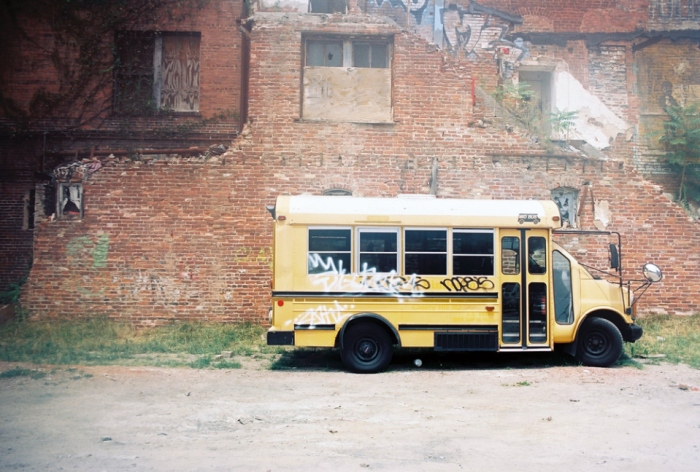 I learned about Steve's work a couple of month ago when I moved to Atlanta. I was intrigued by his immediate style and his ingenious perception of color and composition together with deep understanding for various film stocks. It was clear that I had to learn more about his work and I asked for an interview. Here is what Steve has to say.

Please tell us about yourself.

I did photography for 3 years when I was in high school where I learned the fundamentals of shooting and developing black & white film. That was in the late 70’s but it is only 3 years ago when I bought a Nikon 5000 that I decided to continue.

I became a programmer during the dot-com bubble and at that time, there was a sense of adventure in being hired to contribute to all kinds of innovative projects. Now, I just do it for a living while photography allows me to do something about which I am more curious and passionate.

What pushes you to shoot? What do you shoot (for)?

Photo-journalism was the original motivation for doing photography again but without the commitment of doing anything of great artistic value since I didn’t have that level of confidence.

My degree is in Economics and I wanted to communicate my belief that the only way to remain prosperous in the global economy where all workers in the world are forced to compete and are easily substituted is to promote sustainable habits and develop local markets for better quality products. Photo-journalism was a way to raise public awareness by telling the stories of small producers, merchants, artists and politicians contributing to the potential and pride of their local communities. With the expending globalization of the economy and deteriorating wages, I was convinced that building strong local communities was not just a hippy thing anymore but also a matter of survival. A year after registering the NexusofChange.com domain name, the Occupy Wall Street movement started and I was ready.

Covering Occupy Atlanta events since the start, giving interviews to local organizers, and constantly being issued criminal trespass warnings by the police when the movement is manifesting around banks or large corporation gave me the experience I was looking for and my photo blog became very popular amongst local activists.

But now, I want to continue raising public awareness with a more artistic side and communicate with everybody with images that capture the imagination. I feel like I was starting to repeat myself when I was doing photo journalism. Taking the plunge by attempting to create photographs with genuine artistic value and not just shooting “good” pictures, would embark me on a path of continuous growth.

An example of this shift could be shown with these two albums taken in Vine City about the same topic. The first album shows pictures taken with a digital camera. The pictures are framed and put together in such a way that they tell a story. They are descriptive pictures:

The second album has no text, except for image captions. The images are shot with a film camera, and they are more impressions of reality with a somewhat dreamlike quality. The old look and feel and the close-up on the plants with a beautiful blur behind are among the effects that make the viewer more comfortable. The viewer is engaged with the subject through his imagination:

What is your style?

My style still has to be revealed and might eventually include toy cameras like the Diana or pinhole cameras, or very expensive old cameras and lenses. But before doing that, I need to develop my unique style based on my own observations instead of doing the same thing anybody else would do with the same camera. I am exploring different combinations of film, lenses, and light conditions and while doing that, learning to control these elements for predictable results. Once I can produce expected results, I can move to the next step, which is to create my own compositions.

Almost three years ago, while living in Durham, North Carolina, David Zuber, Francesca Fillardo and I started the Durham Shooting Club. The name was purposely meant to be a mockery of the fear people still had of a city that had been known for its urban decline and criminality, but Durham was now going in a new direction with the kind of investments and pride that generated and continues to generate projects and business growth resulting in urban revitalization and historic preservation. This initiative is now continuing in Atlanta.

When you shoot, do you go out with a plan, or do you let it happen?

The plan that has worked best for me so far is going back somewhere where there was one or two particular things I wanted to shoot and once there, I realize that there are many pictures to take.

Are there any photographers/artists/role models that influence your work or inspire you?

I’m inspired by old 50mm masters like Henri Cartier-Bresson but the people influencing me now are a variety of people exposing their pictures on WordPress, which is a great community to learn from each other.

Do you have a specific goal for the development of your photography?

Getting the unique combination of film, lenses, cameras, and light sources to create pictures that will make people stop, completely stop, for 5 seconds.

What projects are you currently working on? How do you allocate time between “private” and “commercial” projects?

I am in an exploratory phase using subjects that are very representative of the environment in which they are found. For this, I am using StreetsofAtlanta.com.

Is there a project you are especially proud of?

For creating pictures with artistic value, that communicate with people through their sensation, not yet.

Is there any specific advice that you have for us?

Do the simplest things first and do it very well before doing more abstract or artistic creations. Don’t let your photos simply be the direct result of using Instagram or this or that particular instrument.

Now let us have a look at some of your favorite shoots.

A lot of people like this picture. Despite the signs of urban decay, the school bus suggest that we still live and raise children in these old neighborhoods that we haven’t completely abandoned and that we don’t want to completely abandon because of the character we find in them, and in their architectural heritage in particular. 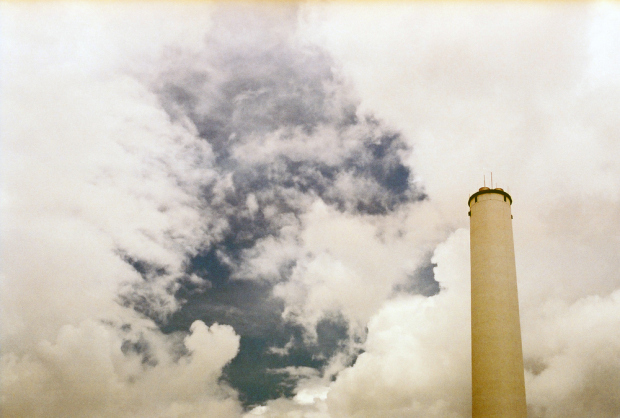 This subject is typically great in black and white because B&W emphasizes the dramatic effect of the smoke stack’s presence in the sky. The results were surprising because I didn’t expect color to work so well and to look like that. What is smoke and what is cloud is not obvious and there’s still energy in the picture despite the fact that no more smoke is coming out. 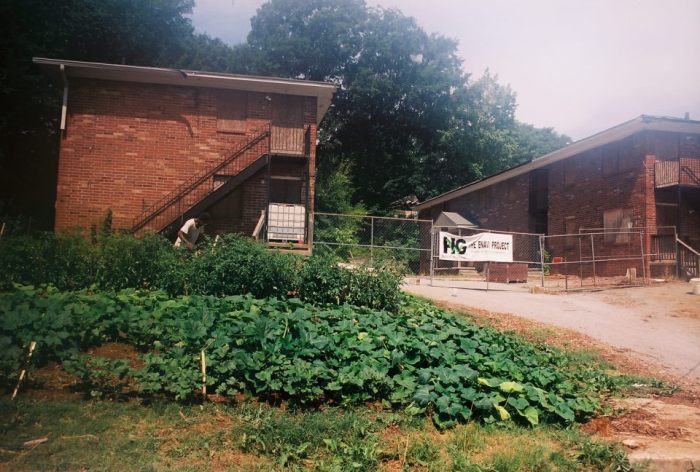 This is a picture that makes a statement, clearly showing the emergence of community gardening in a neglected neighborhood. The viewer is also more comfortable with the subject because of the particular dreamlike quality of the film. 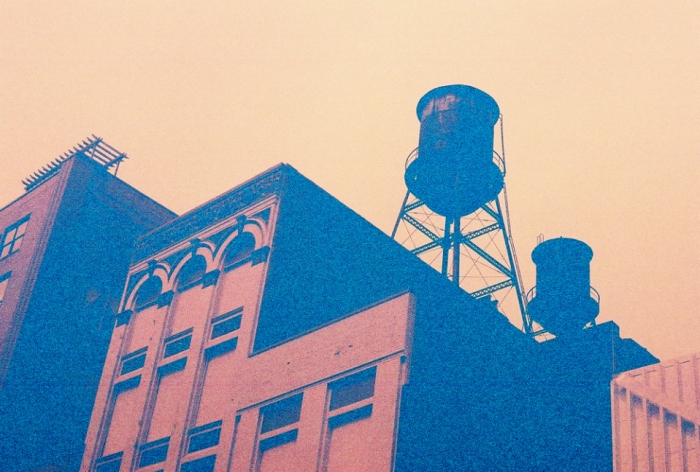 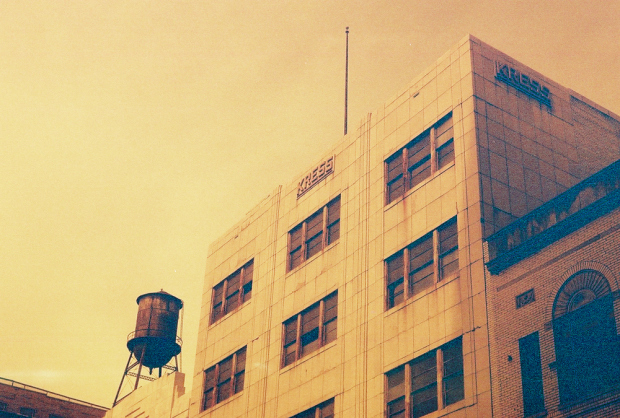 These two pictures are example of artist effects that I occasionally like to create. I think the first one could look very nice printed on various media such as t-shirts or wood. The second one is a good alternative to B&W for creating nostalgic renditions. 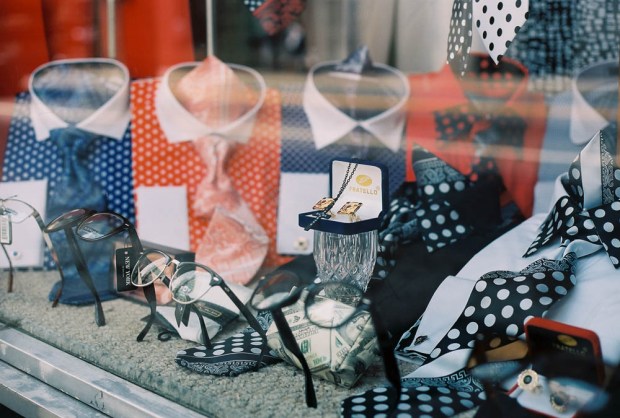 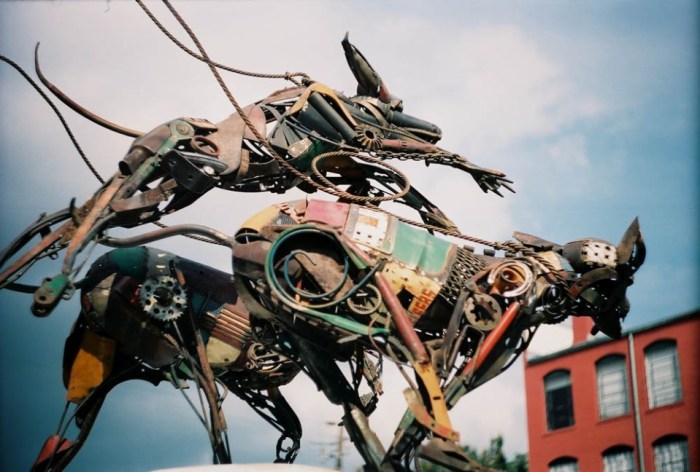 A good example of the Kodak Portra 160 for green and red. 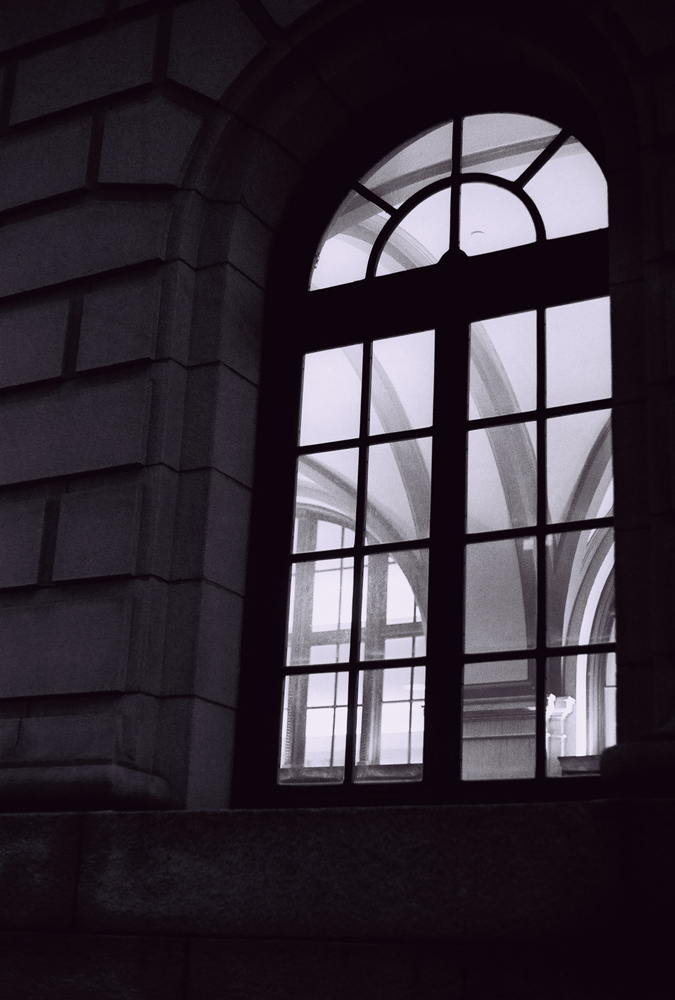 I like this one because it shows the possibility, something that matters a lot to me, to shoot with a hand held camera at very low aperture speed. B&W might also be more forgiving than color. 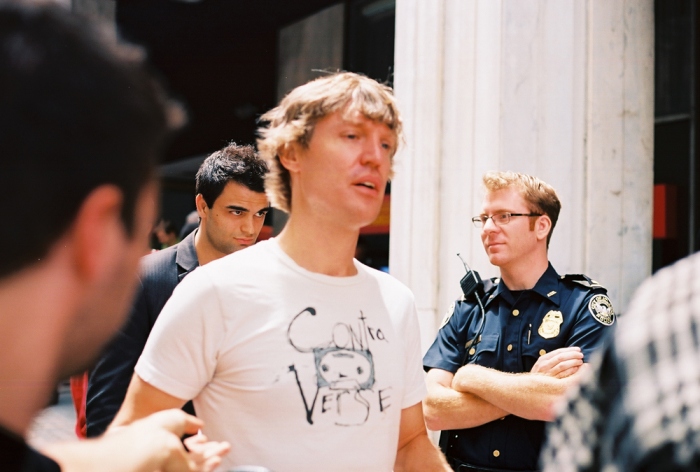 To get this result, I applied a concept that I often use when I want to set the focus on two subjects of equal importance. I position myself in such a way that I am at equal distance from each subject, as if I were at the tip of an isosceles triangle and the two subject were the other ends of the triangle. The guy on the left was the bank manager who asked for police protection for his branch while the guy on the right was the police lieutenant in charge of operations. 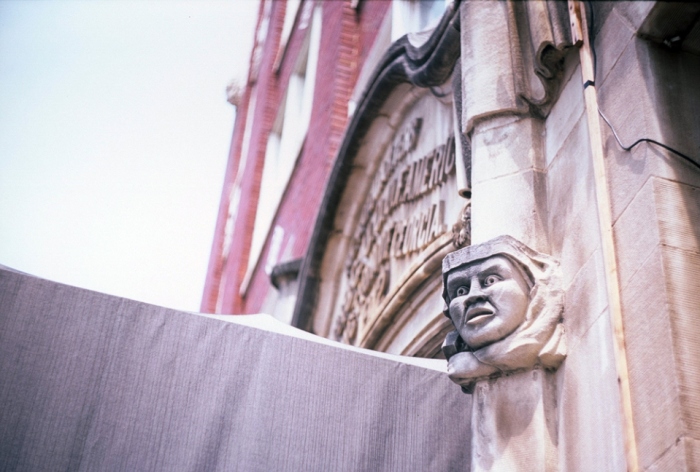 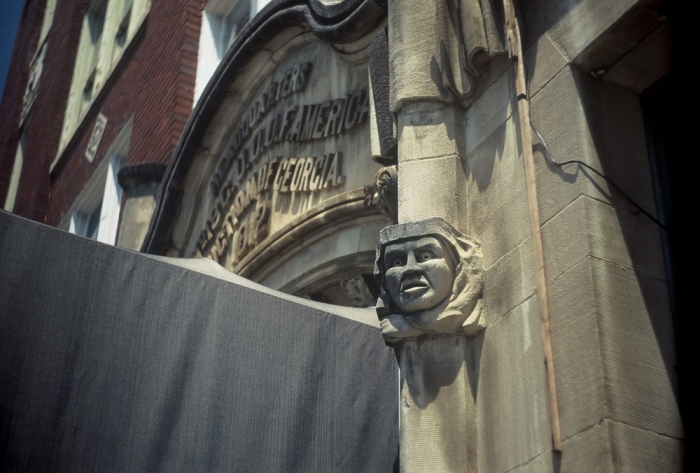 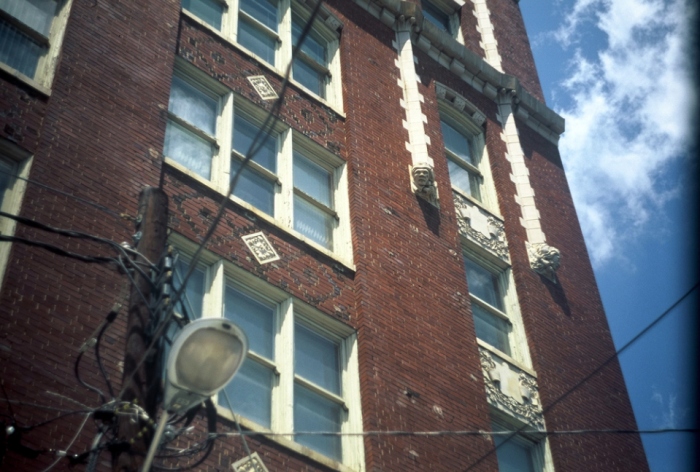 These pictures of gargoyles are a good representation of what I like to explore. The color palette was the unique result of the lens and film used. The colors and sharpness vary significantly.

But as I am describing these very different pictures of the same subject, I am also now realizing that I need to review my notes because while I don’t doubt that the first picture was shot with a Helios 50/2, the other two seem to have been taken with a Vivitar 50/1.7 instead of the Helios 50/2 mentioned in the caption.

Thank you very much for your time!

Do not forget to checkout Steve Osborne's work:

as well as the links above in the text.