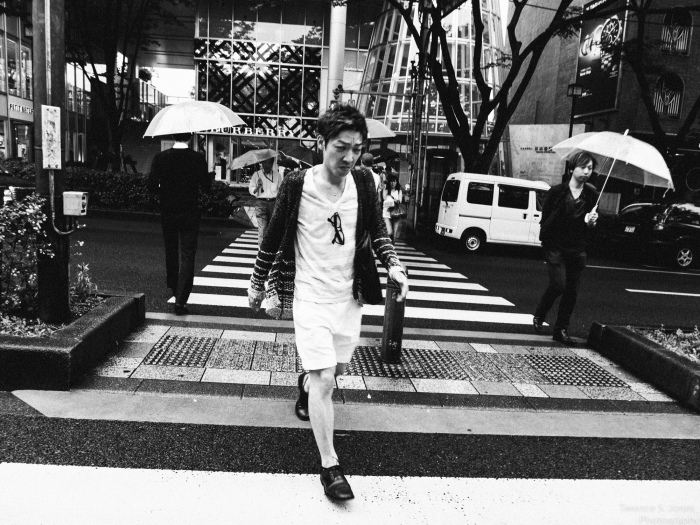 Robert Capa‘s “If your photographs aren’t good enough, you’re not close enough.” distills one of the core concepts (of a certain type) of photography: capture the essence of a scene or event by being a part of it. This is easier said than done and comes with both technical as well as a compositional and conceptual considerations.

Before we get into the more conceptual and compositional aspects of Robert Capa’s statement, let us first have a quick look at the technical aspect, of how distance and focal length interact. The basic idea is rather simple: the longer the focal length, the further you have to be away from your subject: at 90mm you can be good 2m away to get a very tight headshot – for a whole scene you need easily 10 meters. The shorter the focal length, the closer you have to be physically to capture a scene: at 28mm being 2m away will allow you to comfortably capture your subject in the frame and at about 3 meters you can capture a full scene. If you want a tighter framing you have to get very close (< 1m) in some cases. This is the reason why street photographers often work with a focal length of 28mm or 35mm so that they can immerse themselves into the scene.

Now that we got the technical aspect, let us take a closer look into the compositional and conceptual one, which is more challenging and a bit on the metaphysical side. We have to understand that getting close means interference. There is a critical distance, where we start to be part of the scene and we influence what is happening or even participate in it. Nobuyoshi Araki (here is a nice interview [NSFW]), one of the most (in-)famous Japanese photographers, understands this very well. For him there is an intimate relation between the photographer, the model, and the camera. In particular, this becomes obvious in his earlier works such as Tokyo Lucky Hole, where he explored Tokyo’s “entertainment centers” in the early 80’s before the New Amusement Business Control and Improvement Act became effective on February, 12th 1985. There is little doubt that his models and subjects were aware of his presence. In fact, he and his subjects were involved in an active dialog; he was interfering. He was very close, which allowed him to capture very unique perspectives and emotions making his subjective perceptions integral part of his photos. In fact, sometimes he got so close that he was actually depicted in his own shots as being a part of the scene.

Daido Moriyama‘s approach is similar with respect to being close, yet overall very different (see also this post about Daido’s style by Eric Kim and this video). He considers it an honor to be compared to his stray dog (one of his most iconic shots) exploring the streets of Shinjuku, Tokyo (among several other locations). Daido also got very close, however it seems that he did not interact as much as Araki. This makes sense given Daido’s “no-viewfinder” method that proposes that taking the camera to the eye takes too long, reveals your intention, and the moment might be gone once you have raised it to the eye level – he was shooting “from the hip” using inconspicuous compact cameras. The implications of this methodology can be seen both in the composition as well as in his level of involvement: people tended to notice him (at best) after he took the actual photo. The use of compact cameras allowed him to blend in and to capture very raw images without interfering too much (Moriyama is (apparently) using/involved with the Ricoh GR at this point). The level of interaction seems to be a major difference compared to Araki.

So what does it take to be part of the scene as these two very different photographers demonstrated so vividly in their work? Of course, there is a cultural difference: both had a similar cultural advantage of not requiring some ultimate purpose. Moreover, there are many more photographers with a similar blending and penetration yet different philosophies, such as HCB and Robert Capa. Moriyama and Araki should merely serve as examples which are disconnected to a certain extent from our western culture and philosophy. This makes it easier to not impose too much of our own cultural predisposition.

Stable identity. The idea of a stable identity is the following: You can only blend into what you see and fully immerse yourself, if you are not afraid of losing yourself in the process. The general perception of Araki, for example, is that he is somewhat mysterious and his character, identity, and beliefs are inaccessible although he is very prominent in many of his own photos, either in person or by means of composition and rendering. How is this possible? Precisely because he could easily take roles when blending in without compromising his ultimate identity. Let me reiterate on this. Whenever we are not fully stable in our beliefs our identity is somewhat brittle. If we now blend into some scene we have to deal with what we see and what we are part of. This might create some contradiction between what we see and what we believe: what we see bleeds into our reality. If we are not very stable we will immediately start to reconcile what we see and try to integrate it into our reality; after all how can we accept it if it is contradicting our views? This integration typically means that we start to judge, have prejudices, show maybe contempt etc – the scene rejects us…. aaaaaannnndddd: we are out. The ability to immerse ourselves into what we see requires us to be so stable as to dissipate the contradictory elements. Araki seems to have been a master of dissipation – maybe partly because some things resonated more easily with him – this interview is very insightful.

Context-free-ness. This brings us to the second requirement that I want to call context-free-ness. The short version is that we can only ‘join’ some story if we do not bring our own story along. This starts with some very simple things such as if you want to go out to shoot then go out to shoot with this single purpose in mind. If you bring some friend(s) or your significant other along, then you bring your own context, making it very hard to be able to join the scene. You are not free enough for this. Context often makes shooting a subordinated goal which will frustrate you and the people that you brought along. This is also true to some extent when bringing other photographers along. Make sure that it does not constitute context. Araki, for example, went out shooting the entertainment centers of Tokyo together with Akira Suei (the editor-in-chief of Photo Age). This was only possible because they went out together to blend in. They made sure that they did not impose context on each other.

These two aspects constitute a mind set that makes us open enough to participate in a scene. What is left now is that we need to participate. We need to go out and shoot, talk to people, interact, join them. Surely, there are areas that are more suited than others. For example, Shinjuku (where both Moriyama and Araki shot) is an excellent location. It is very vibrant, full with people, and there is always something happening. Many other locations can work equally well. We just need to be open minded.

I hope you all are enjoying your holidays!! — TSJ.

2 thoughts on “Being part of the scene”